I believe that having fun while learning a foreign language is very important for keeping our young students motivated. That is why I try to balance the time we spend covering the curriculum, with some time when the children can relax and have fun.

There is an old Chinese proverb that describes the beauty of learning languages through games:

Games provide an alternative route to learning a language while providing a pleasurable method to do so. Children love to play games because they offer a dynamic learning atmosphere and they don’t realize that they are practicing the target vocabulary because in their minds it is just a game. Do we need to review numbers 0 to 100? Let’s play Bingo! Do we have new vocabulary about farm animals? Let’s practice it with a farm animal domino. Are we learning body parts? “Simon says” works fantastic! Verb conjugation? Rolling dice challenges them as well.

My students also like listening and singing Spanish songs. I usually prepare worksheets where they need to fill out some missing words by listening to the song a couple of times; afterwards we talk about what the song is about and finally they learn the lyrics and sing the song. Another entertaining activity where the students practice vocabulary is having contests. Sometimes they play individually,  other times in pairs or in teams.

But what the students love most is preparing a play in Spanish. The children enjoy the rehearsals, reading their lines, improving their pronunciation and finally, performing the play in front of the parents and relatives.

Those are examples of the fun things we do at LAL Spanish class.

Mexico is mostly a Catholic country, so Christmas starts on December 12th,  when Mexicans celebrate the first apparition of Our Lady of Guadalupe.  Christmas celebrations in Mexico end on January 6th with the celebration of the Epiphany.

It is funny when I tell this to my students, since children in México receive presents on both Christmas and on January 6th; you can always hear the “no fair” voiced amongst them.

A unique celebration in Mexico during this time it’s called “Las Posadas”. Posada means “Inn” in English, and it’s when people recreate the time when Mary and Joseph were looking for a place to stay and spend the night. Mary and Joseph, characterized by the guests (usually neighbors, friends and family), sing verses outside asking the host family to let them in, and the host family answers from inside the house telling them “there’s no place for them”.  The nightly routine ends when the home owner recognizes who is asking posada and they let them in. After that hey proceed to pray, eat, and break a piñata. 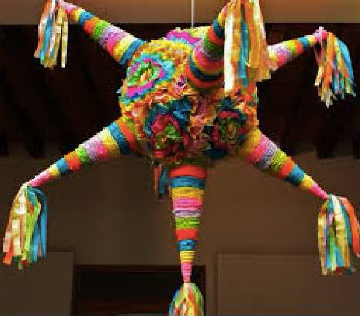 Las Posadas last 9 days with different families taking turns to host, and culminate on December 24th with a midnight mass called “Misa de Gallo”, which means in English “The rooster’s mass”, because it ends past midnight. Following the mass, people gather in the host’s house to place baby Jesus on his manger with prayers and songs, before enjoying delicious food and the company of friends. Then everybody goes to their homes to spend the 25th resting.

The piñata used in Las Posadas has a religious meaning that I personally find very special. It’s a Piñata with 7 cones, each one representing a capital sin named in the Catholic tradition. The Piñata represents the world and it’s covered with colorful and beautiful paper, which depicts the temptations always dressed as something beautiful to catch our eye. The person who’s trying to break it is blindfolded, which means that our faith is blind, and uses a stick to hit it, which represents our strength, self-control and the willingness to end the evil in the world. When the piñata is broken, many goodies fall from it, which represent the awards we receive for fighting evil and our willingness to do what is right.

On January 6th, children wait for the coming of the three wise men who visited Jesus. The night before, they put their shoes at the door to receive the presents brought for them. Family and friends then gather to cut and eat the “Rosca de Reyes”, which is bread shaped as a big bagel decorated with dry fruit and sugar.  Inside one may find little plastic kid figurines. The figurines represent the children who were hid when Herod ordered to kill them looking for baby Jesus. People who find a figurine in their piece of bread (usually three or four through the entire Rosca), make a team to hold a party on February 2nd to celebrate “La Candelaria” (the day of light), when Jesus was presented in the temple.

They order tamales (made of corn-based dough (or maize), and can be filled with beef, chicken, pork, chili, cheese, beans or vegetables; and champurrado (a drink made with flour, cinnamon and milk). Once again, this is celebrated in the company of loved ones, dear friends and neighbors.

El Dia de los Muertos is a very important holiday in the Spanish culture, and falls very very close to a fun holiday for children in the United States.

On November 2nd, soon after the children in the United States have celebrated Halloween, the adults and children in some Spanish speaking countries, especially Mexico, celebrate this day. The day is filled with images of skeleton bones and the sweet taste of candy and cakes. Unlike Halloween, El Dia de los Muertos, which means “Day of the Dead”, is not meant for costumes and pranks. Instead it is a special occasion when families remember and honor their friends and relatives who have died.

By mid-October bakeries are hard at work creating special breads and buns in the form of animals and people. Candies are made in the shapes of skulls and are decorated with bright icing. The famous and delicious “Pan Mejicano de Muerto” (Bread of the Dead) is very popular across Mexico.

In South America people celebrate this Holiday going to the grave yard with flowers and candles. This is a special occasion to reunite families and friends.

Did you know that Cinco de Mayo (May 5th) is NOT Mexico’s Independence Day? It is actually celebrated in the month of September, on the 16th. It is a Mexican holiday to celebrate the “cry of independence” which occurred on September 16, 1810 and started a revolt against the Spaniards.
Miguel Hidalgo is believed to have made the cry of independence (El Grito de Independencia) in the town of Dolores, in the north-central part of the Mexican state of Guanajuato. Hidalgo was one of the nation’s leaders during the War of Independence in Mexico. Mexicans celebrate their country’s Independence Day with fireworks, parties (fiestas), food, dance and music on September 16. Flags, flowers and decorations in the colors of the Mexican flag – red, white and green – are seen in public areas in cities and towns in Mexico. Whistles and horns are blown and confetti is thrown to celebrate this festive occasion. “Viva Mexico” or “Viva la independencia” are shouted amidst the crowds on this day

Registration for the 2017-18 school year is now available through Eagle Rec.  Remember that starting this upcoming school year our program will be offered 5 days a week!

We are looking forward to seeing all of you, tomorrow May 18th for our end of the year celebration. The location for this year’s program is Zionsville Middle School.

Please note that program starts at 6:30 PM, however we ask that students participating arrive by 6:00 PM

I would like to take this opportunity to explain what happens in Spanish Class every time your children come through door. My ultimate goal in class is to get students following directions and commands in Spanish throughout the entire class. For my students to be able to do that means they are learning the use of language structures and how to answer to them.

I’m lucky to teach children from preschool all the way to middle school, and that gives me the incredible chance to set goals in each of my classes thinking towards the future, and completing the step-by-step process of learning another language. END_OF_DOCUMENT_TOKEN_TO_BE_REPLACED

Hello, this is Ana Amaro, Spanish teacher at Stonegate and ZWMS.

Today, I would like to share with you what I do in my classes during the first and the second semesters. First semester is always hard for the kids and sometimes even for me, I have kids coming from Señora Essig´s class, kids who has been with me for 1 year already and kids totally new to Spanish; so in the first semester I try to put all of them more or less into the same level. I work with one text book but 2 different work books depending of their level.

During those first months, we learn or review the verb to be, to have, to like, regular verbs, personal pronouns, articles, feminine and masculine nouns, plural and singular, so at the end of the semester on the last day before winter break, we open our class to the parents and show them our routine in class and everything we learn about conjugation verbs. This class is totally spontaneous, I like to make them think, I challenge them, so that they understand the reasoning of everything instead to “repeating as parrots”.  At the third and fourth grade level, kids have the maturity for my class. It is amazing how fast they can learn. As an adult I think we sometimes underestimate our kid’s capabilities.

END_OF_DOCUMENT_TOKEN_TO_BE_REPLACED

This is a very active and motivated group of students eager to learn every morning.

It is crucial that I set up an environment that is comfortable, safe and effective for the class. I have set up a morning routine in my classroom so that the students know what to expect the moment they enter the class.

The students know when and how we complete tasks and activities. They participate in combination of partner, small groups and whole group exercises.

The students are learning about México and how people live, greet and say goodbye. Our curriculum also includes history, traditions, customs and geography of this country. Every morning I select three different students to introduce themselves to new friends by imagining different scenarios in México and engaging in a dialogue with their classmates. END_OF_DOCUMENT_TOKEN_TO_BE_REPLACED

What does Spanish mean for our children in the 1st and 2nd grade at Stonegate Elementary School? It means it’s time to learn another language and have fun! We learn through repetition, memorization, producing what we learn, and games.

It is amazing how the kids can absorb that much vocabulary in such a short period of time. END_OF_DOCUMENT_TOKEN_TO_BE_REPLACED 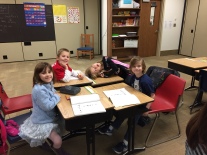 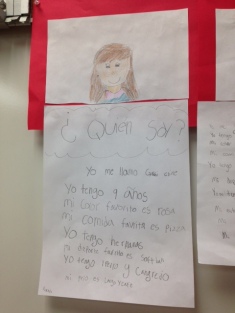 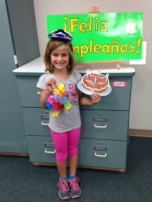 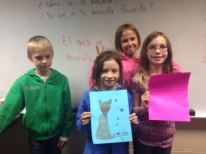 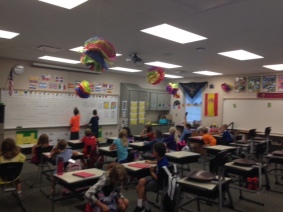 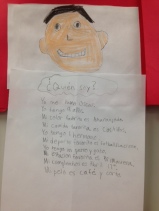 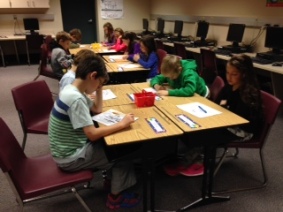 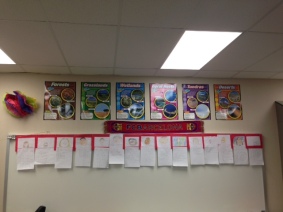 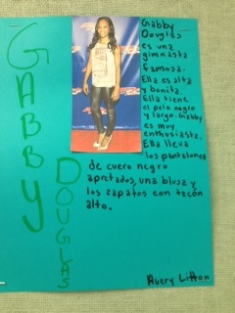 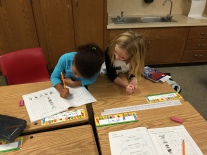 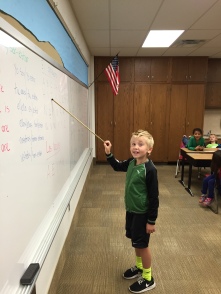 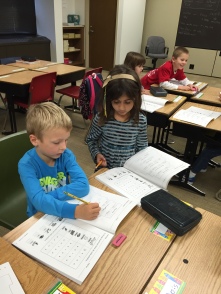